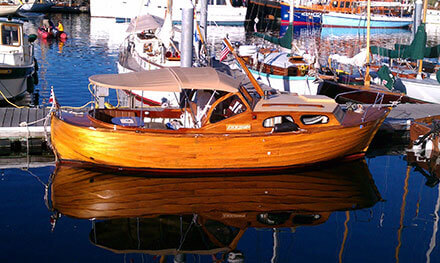 Here at Elco, we have the privilege of serving some of the most interesting boaters in the industry. Along with boatbuilder Bryan Gittins, Seattle’s John Jorgensen is also a world-renowned mariner, with more than a half-century of experience on the water.

Jorgensen was born into a fishing family in his native Norway. Both his father and grandfather were commercial fishermen, and John started working on his father’s coastal dragger when he was only eight years old. After moving to the United States, Jorgensen stayed true to his fishing roots and worked some of the most dangerous fishing grounds in the world: the Bering Sea in Alaska. “I spent a good part of my life chasing crab around,” says the 70-year-old Jorgensen. “I have many memories of being at sea. Many friends and relatives lost their lives in my career.” Like any lifetime mariner, Jorgensen knows that while the sea may in turn provide and punish, it must always be respected.

With his vast experience, Jorgensen has gained the respect of the crab fishing community in Alaska. However, his influence stretches all the way into mainstream American popular culture. In 1978, Jorgensen bought a 156-foot oil barge from the US Navy. He outfitted it to be a crab fishing boat, renamed it Wizard, and spent the next 25 years fishing off the coast of Alaska. In 2005, Jorgensen sold the Wizard to Keith Colburn, who can still be seen captaining the vessel today on the hit Discovery Channel show Deadliest Catch.

Even as a retiree, Jorgensen lives his life on the water. His boat, pictured above, is a beautiful 27-foot Norwegian double-ender. It was built in 1977 from Norwegian white pine, and is one of the last wooden boats to have been built in Norway. The boat’s name, Kronkenen, means “hiding place” in Jorgenesen’s native tongue. “We use the boat in Puget Sound, Lake Union, and Lake Washington,” says Jorgensen, “sometimes for fishing and sometimes just cruising. I’ve had enough of storms and 80-foot seas. I like calm water and sunshine now.”

Krokenen is outfitted with an Elco EP-2000 motor, which Jorgensen has augmented with a 3.8 kW generator as backup. “I used the backup generator once,” he says, “on the way to the Port Townsend boat show, about 40 miles away.” Having seen marine technologies come and go during his lifetime on the water, Jorgensen believes the Elco EP motor is here to stay: “Every boater is aware of the need for keeping our waters pristine for us and future generations. The Elco motor is very clean and silent, and I think it’s the future of boating.”