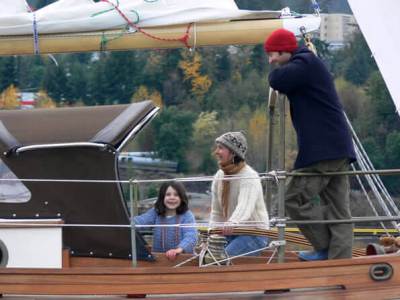 Bryan Gittins knows a thing or two about boats. They’ve taken him from his childhood home in Argentina to points all across the globe. His journey has swept him to London, Canada, Chile, South Africa, and eventually back to Canada, where he now owns the exclusive rights to manufacture the Falmouth Cutter 34. Gittins has extensive knowledge of woodworking, and has graduated from working for a Peruvian furniture maker to owning his own boatyard: Channel Cutter Yachts in Ladysmith, British Columbia.

The Falmouth Cutter 34 is the final design of Lyle Hess, a native Idahoan who made his home in southern California. Hess called the 34 “The best boat I’ve ever designed,” a lofty statement from an architect with a devoted following and numerous designs under his belt. His customers and friends knew Hess as a man with an incredible eye for, and attention to, the detail work of designing and building sailboats. It’s fitting, then, that Gittins be the one tasked with building his final design.

Gittins first began working on boats at the lowest rung of a Canadian boatyard building another Lyle Hess design, the Bristol Channel Cutter (BCC) 28. From this he graduated to owning a small boatyard with his friend Al Brunt. After several years of superior craftsmanship at the expense of a steady income, the venture dissolved. He spent seven lean years building a 28 named Danzarin, and sailed to South Africa in search of more BCC-building boatyards. He looked up Ed McNeil, who had purchased the exclusive rights to build the Falmouth Cutter 34 but needed help with the kind of fine woodworking – rudders, hatches, tillers, etc. – at which Gittins excels. From this partnership, Gittins eventually realized his dream.

He returned to the States, sold his beloved Danzarin (“dancer” in Spanish), and bought five acres in the shoreline city of Nanaimo, in British Columbia. After finishing a beautiful BCC 34 for McNeil while in Houston, he saw the possibility of making a living from this craft. Gittins purchased the exclusive rights to build the 34 from McNeil and set up Channel Cutter Yachts, where he’s been working ever since.

Gittins puts immense care and craftsmanship into each boat he builds, so it should come as no surprise that he outfits his boats with Elco Electric Propulsion (EP) motors. With thousands of hours at sea and multiple major ocean passages, Gittins is a world-class sailor building top-notch vessels. Check him out at http://www.channelcutteryachts.com/